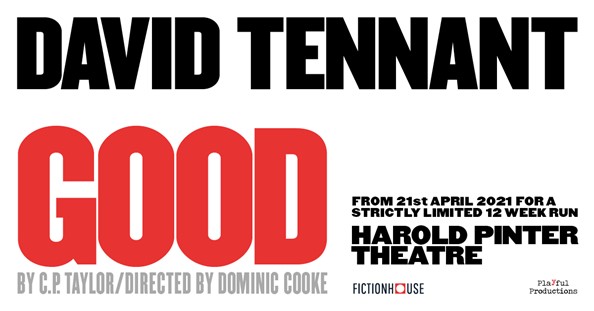 C.P.Taylor’s GOOD, starring David Tennant and directed by Dominic Cooke, which was due to open this October, has announced new dates for 2021 and a new run at the Harold Pinter Theatre.

Produced by Fictionhouse and Playful Productions, GOOD was originally scheduled to begin performances at the Playhouse Theatre on Tuesday 6th October. Due to the current global situation, the production was postponed and will now preview at the Harold Pinter Theatre from Wednesday 21 April to Saturday 17 July 2021.

By signing up you confirm you wish to hear about the best shows and offers from the Ambassador Theatre Group, including Good. You can unsubscribe at any time. Please see our privacy policy for more information on how we handle your data.

Thank you for your continued commitment to the theatre community at this challenging time. We look forward to welcoming you back to our theatres once it is safe to do so.

John Halder is a good man. But John Halder must adapt to survive. How is it possible to be a good person when things are falling apart?

"You make a deal with yourself one minute, you totally repudiate it the next."

As the world faces its Second World War, John Halder, a decent, intelligent, music-loving German professor, finds himself swept along in a movement that crescendos towards an unthinkable finale. Good is a warning for our times.