Review Round Up - Madagascar The Musical

For the first time ever, Selladoor Family and Hartshorn-Hook Productions present Madagascar The Musical, which opened with us on Saturday. They take the Dreamworks classic film of the same name and add fundamental stage necessities such as storytelling, impeccable design, killer choreography, wit, humour, flare and a roaring score, oh and not to mention skilful puppetry.

The plot follows Alex the lion (Matt Terry), the king of New York City and main attraction at New York's Central Park Zoo. We meet his best friends in the number Showtime!; Marty the zebra, Melman the giraffe and Gloria the hippo, the group have spent their whole lives in blissful captivity. Yet Marty, not content, lets his curiosity get the better of him and makes his escape with the help of some prodigious penguins. Stumbling upon King Julien's surreal and eccentric Madagascar.

Making Madagascar The Musical the perfect family night out, with vibrancy and pace for the kids and more complex innuendo for the adults. Don't believe us? Here's what the critics had to say: 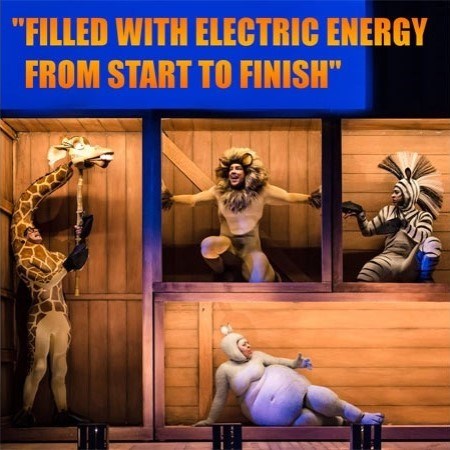 'This is a family friendly show and so re-connect with your childlike thoughts and just sit back and be entertained. There are some adult jokes which will go over the heads of the little one's but make us 'older children' laugh.'

'There is nothing not to like here, it's bright, fun, has audience participation, brilliant choreography- (Fabian Aloise) and great singing.'

'[A] breezy night of theatre perfect for a family outing during the school holiday season. Even the most fidgety five year-old will be transfixed by Max Humphries' intricate and entirely convincing puppetry design, while choreographer Fabian Aloise certainly 'likes to move it move it', the show is a non-stop whirl of cheesy dance moves and shape throwing.'

'Jo Parsons' King Julien goes a long way towards stealing the show, playing his surreal, party-loving Lemur monarch like a character from a lost episode of The Mighty Boosh.'

'The main thing about Madagascar is that all the characters, including the supporting ones, are likeable and funny in their own way. Everyone is quite different.'

'It is great for getting the kids out of the house and good if adults want to get away and enjoy something more suitable for the family.' 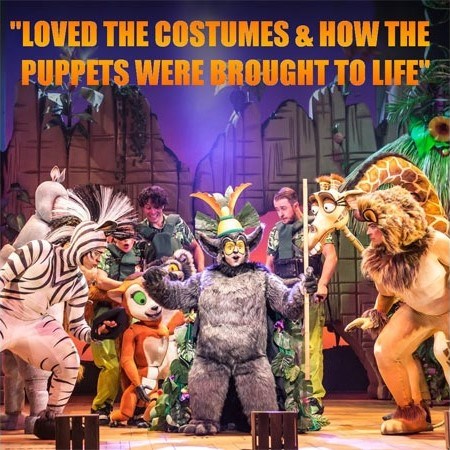 'Fabian Aloise's choreography is wonderfully modern. This movement works hand in hand with Tom Rodgers' sets which are simplistic but vibrant and transition us well from one location to another.'

'The cast are superb; even in the sweltering heat they don't falter and give us intensity and power from start to finish.'

'As the leader of the pack, Alex the lion, Matt Terry is impeccable. From his superb falsetto, riffs and generally beautiful tone. But, Matt's acting and dance performance is equally as strong as he owns the stage and draws the audience into the story.'

'Matt Terry... not only has the voice but the moves and the physicality for this role. Antione Murray-Straughan played Marty and even in a zebra costume he busts out some brilliant dance moves... Jamie-Lee Morgan as the introverted, hypochondriac  Melman and Timmika Ramsay as the loud and proud Gloria are comedy gold, playing off each other nicely. It was, however, Jo Parsons' King Julien that brought the house down from his first entrance...' 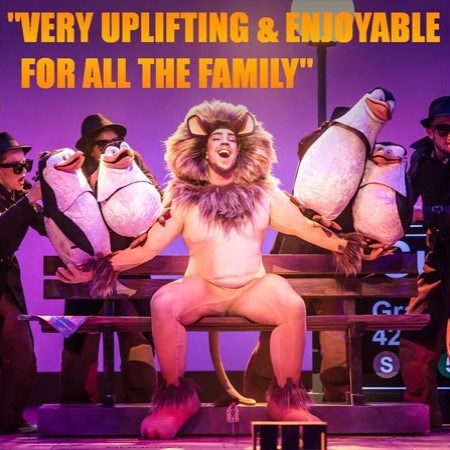 'Tom Rodgers' design is at the forefront of this new musical adaptation. The costumes and Max Humphries' puppets are fantastic, impressively crafted for the stage while still nodding to the original characters.'

'I Like to Move It Move It is the absolute highlight of the show, totally bringing the house down!'

'This is truly a treat for all ages, the bright costumes and funny animals keep the kids entertained while the witty script gives the adults the laughs along the way. If you love the film then go and reminisce, and if you haven't seen it then take the family along for two hours of fun and laughter.' 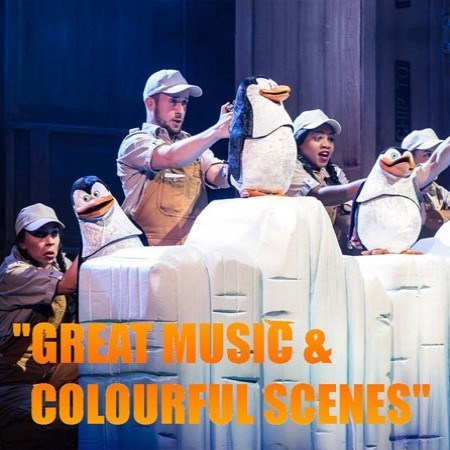 '...it has a perfect duration for kids'

'The penguins, played and controlled by puppeteers Shane McDaid, Laura Johnson, Jessica Niles and Victoria Boden, definitely steal the show in many scenes.'

'The puppets are very accurate and detailed. It really looks like a movie brought to life.'

'The costumes were absolutely brilliant and the set design, bright and enchanting. The use of puppetry for the penguins, monkey and lemurs contributed to the comic mood and magic of the evening.' 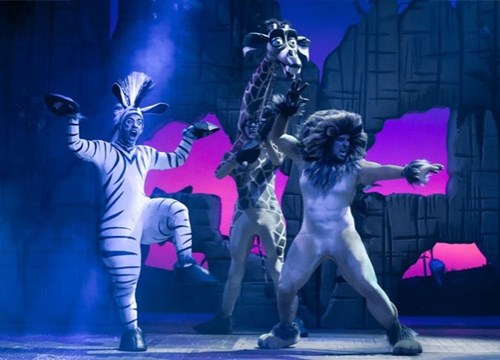 '[Matt Terry] makes a solid theatrical debut, has an infectious enthusiasm and shows some impressive falsetto. Timmika Ramsey is the wise-cracking and sassy Gloria. She has the best voice in the show, with a great range and soulful tone.'

'The script is tight and often funny, but there is also not enough innuendo and a lack of clever asides to entertain the adults fully.'

'...the younger parts of the audience were enthralled. Tom Rogers's design is loud, bright and captivating, with a fantastic use of puppetry.' 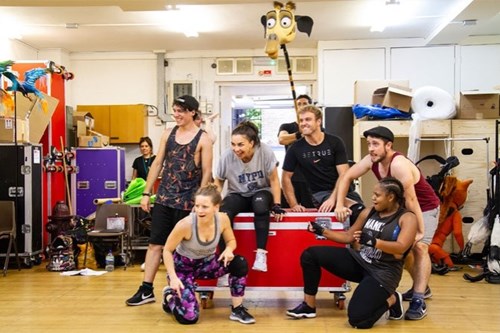 '[Matt Terry had] plenty of athleticism in his dancing and plenty of warmth in his voice, which soared up into falsetto as easily as it powered out the big numbers.'

'At about 100 minutes including interval, it felt the right length for families. The pace didn't sag, and I didn't hear fidgeting.'

'...the show stuck to the winning formula. The costumes looked like the film characters, the dialogue sounded like the film, and the story was a mirror image of the film plot.'

'The aspects that are new, like the puppetry, are right in character; and the singing and dancing is top quality, particularly from Antoine Murray-Straughan as Marty the Zebra.'

'Selladoor and Hartshorn-Hook have taken one of Dreamworks' funniest cartoons and magicked up an all-singing, all-dancing, musical delight.'

[On the puppetry] 'You realise you are laughing, cheering and aawing a big ball of fluff in essence, they are that good!'

'Tom Rogers' relatively simple but multi-tasking set provides the perfect backdrop for the madcap adventures and quickly whisks you from scene to scene.' 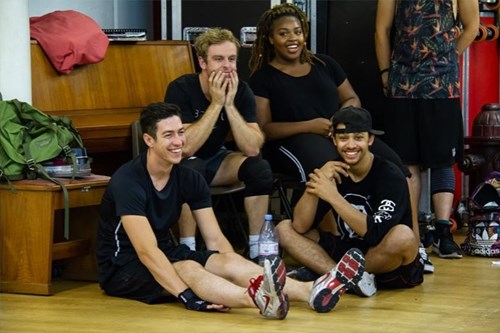 'The production did not disappoint; it struck the perfect balance of hilarity and entertainment with upbeat tunes, cheesy dance moves & fabulous costumes, plus there was some adult humour thrown in; a joke about a rectal thermometer went down a storm with the adults.'

'Alex the Lion played by recent X Factor winner Matt Terry - definitely one of the 'Mane' attractions, his falsettos were incredibly impressive. Still got it. He pulled off a fantastic debut stage performance with confidence and style.' 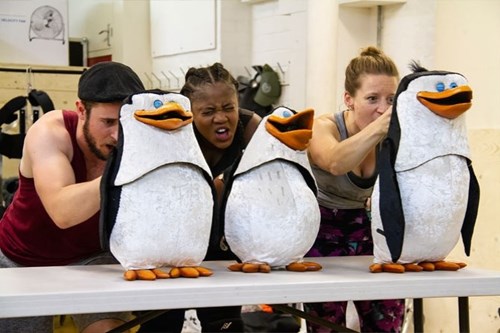 '...secret agent penguins are of course a clear hit with the adults as well as the children.' 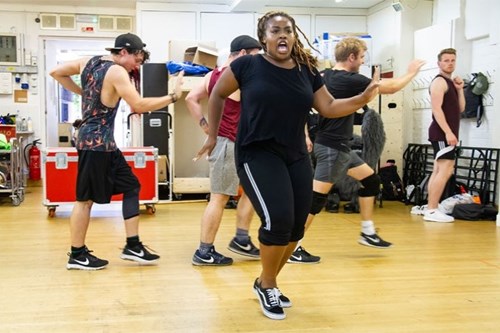 'The kids loved it from the start and couldn't stop talking about it as we left.'

'If you are looking for a show to see with the family this is our recommendation for you for 2018.'